We had been planning for our Spain trip for a long time but something or other will always come up and we would think "OK! May be later." This time we were determined that we will make it and we did!! We planned it on a weekend plus 2 weekdays!! I had butterflies in my tummy because not only I was about to have a long weekend also the next working week was only a 3 day week for me but above all, we were going to see one of our close friends in Spain. 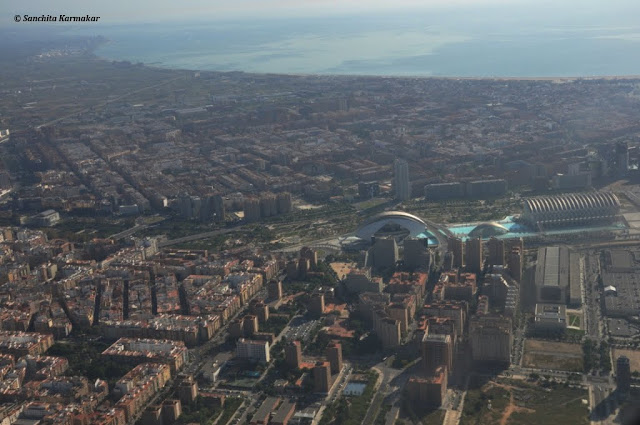 On an average I wake up quite late on weekends but because our flight was scheduled at morning 6.30 am on a Saturday and as usual I did my packing on Friday night, I hardly had only 2 hours to get some sleep. We planned to leave home by 3.45am but not always things go according to plan, we woke up at 4 am and could leave home by 4.30am thankfully at that early hour there was no traffic so we could reach airport on time. 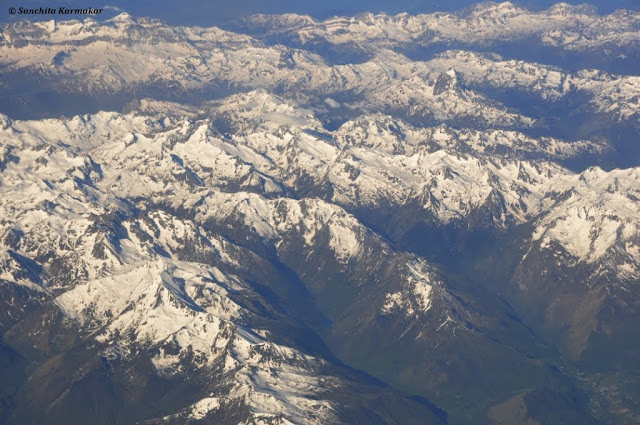 I thought of having a nap in the flight but that didn't happen, instead I took some photos when we were flying over Spain and before landing in Valencia. It was only 2 hours flight, so we reached Valencia at local time 10 am and our friend was at airport to pick us up. 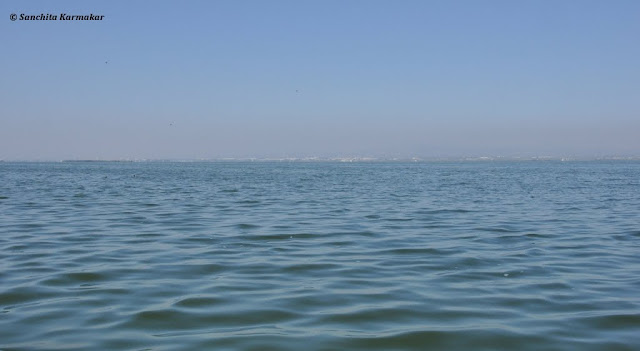 It was sunny 28 degrees in Valencia, we went to our friend's home first, just to drop our luggage and then we went out to explore Valencia and it's neighboring places. Our first stop was a lagoon off the Mediterranean sea. It was a large lagoon as you can see below and it was a unique experience to go through a narrow canal and then opening up to the huge water body. It was amazing. So calm and relaxing, one can actually spend whole day just by the lake and do nothing.
~ The Way To The Open Waters ~ 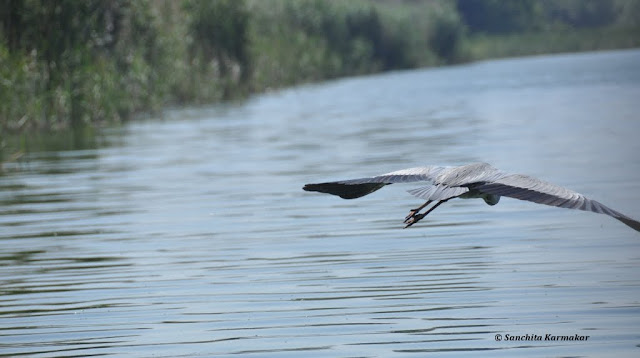 Life in this part of the city was quite relaxed, no one was in a hurry, and people are in general quite friendly and have a good sense of humour. We asked for a ride on a boat in the lake, before getting in to the boat we went to pay for the tickets to the boat owner, he smiled and said "Its ok! Pay me when I bring you back to the pier, if the boat sinks then you don't need to pay!!"
~ The Boat ~ 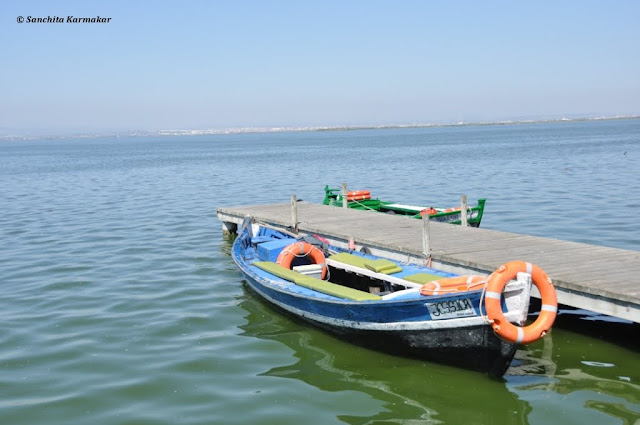 It was 1 pm but in Spain its too early to have lunch, usually people have lunch around 2.30 pm so we had some time in hand so we thought of going to a nearby beach. Not enough time to get into water so we decided to walk along the beach where we won't fully get into the water but no harm in getting your feet wet! The beach was outside the city so we didn't see many people at the beginning but as we continued walking we soon realized why the beach wasn't so crowded. We had come to a nudist beach!!! This was my first experience in a nudist beach Most people around me are completely naked either sunbathing or were in the water.There was a family in the beach, where parents were playing badminton and the little kid was playing in the sand..all stark naked! Among all these people we were there fully dressed walking along the beach.
~ The Fish ~ 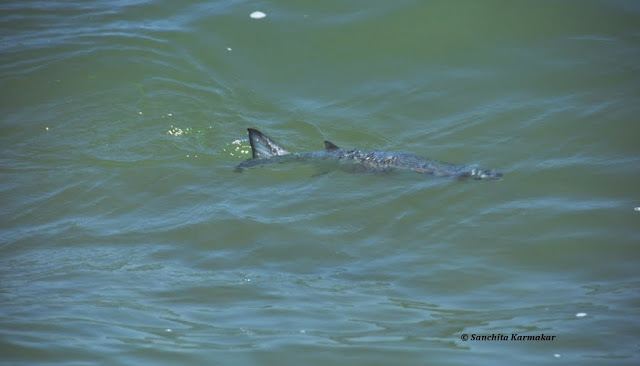 So we concentrated on the sea water, the sand, the stones, there was a fish which was trying to swim back to the sea but for some reason it wasn't able to. Anyway I was quite hungry and so was everyone else, so we went to a small village to have traditional paella. It was a small village called El Palmar which is famous for its paella. We had the traditional paella made up with chicken and rabbit meat with snails served on top. It was amazing. The dish is served on the plate they use to cook paella. Lovely! 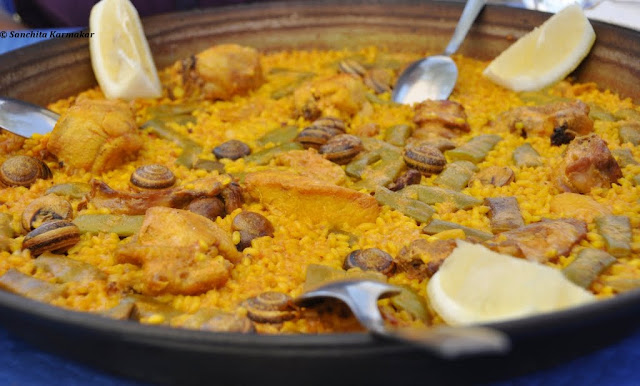 We finished lunch around 3 pm and then headed home to have a siesta. It was very much needed for me as I had slept only for 2 hours last night and Spanish weather and food forces you to have a nap anyway. 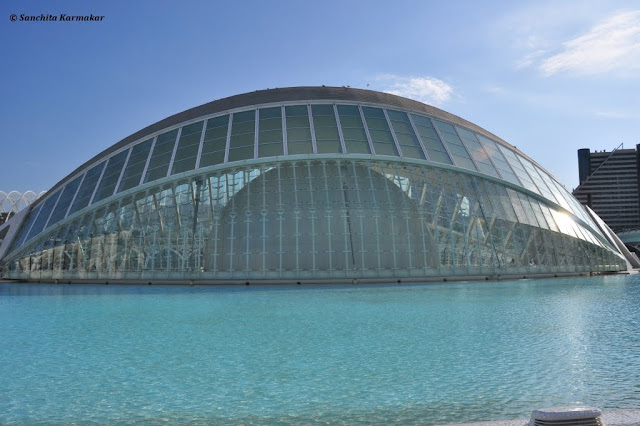 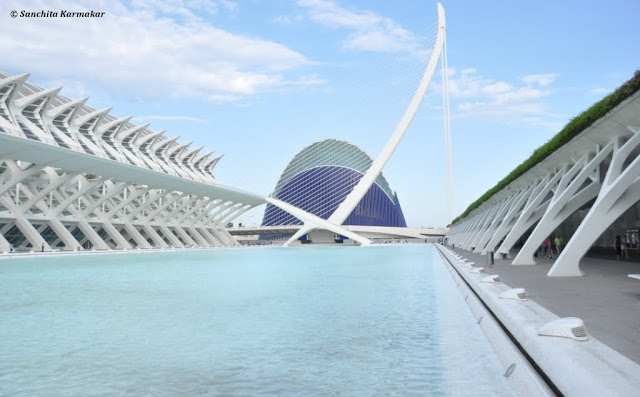 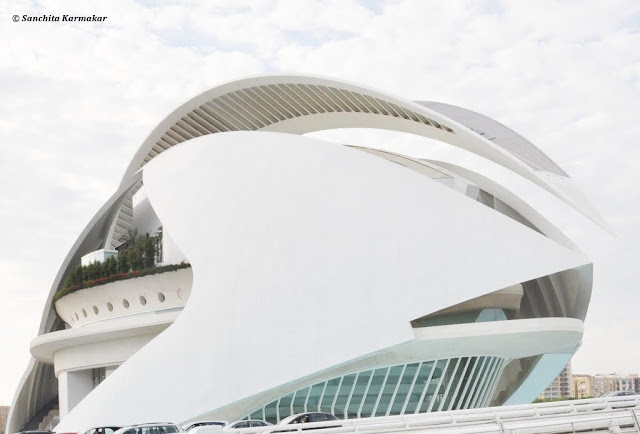 In the evening we walked to the opera house and the aquarium designed by the famous valencian architect Santiago Calatrava. Its called "Ciutat de les Arts i les Ciències" which means City of Arts and Sciences. Below you can see some of the photos of that area and the park surrounding. As you can see the architecture is amazingly very modern and quite obviously Santiago likes white. The colour of the water goes extremely well with the background white colour. It was a very pleasant and relaxing evening walk.

In the evening we went to the city centre to catch up with some old friends. We had dinner in palace famous for Tapas. It was mouthwatering. One of our friends' English wasn't so good but our other friend said, "Don't worry!! After few beers he will speak in fluent English." We really had a great time as I started talking in Spanish after few glasses of wine. We came home around 1 am in the morning and that was the end of day one.