This is a tiny post, just to announce that I am going to take part in photo a day June challenge hosted by Fat Mum Slim. So watch this space, from tomorrow onwards I will be posting one photo every day according to the prompt for each day. I will also share these photos on my Facebook page and twitter.

And since I can’t resist, here is a picture from last weekend’s celebration of something called “Jamai Sasti”. In West Bengal, India this is a day for every son-in-law to be treated with lots of goodies and a special foodie treat from their mum-in-law. 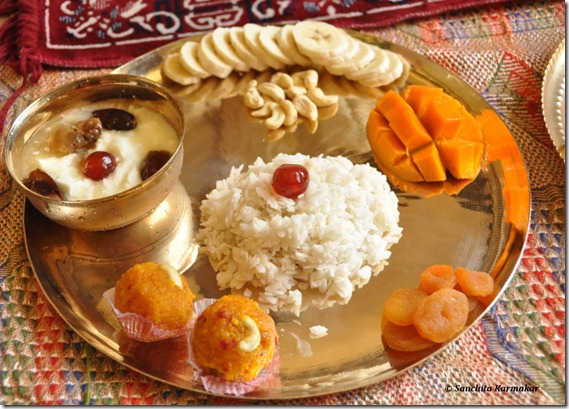 'Here is what S got from my mum early in the morning for breakfast. The plate contains, ripe mango, banana, cashew nuts, soaked flaked rice topped with a cherry, yogurt with date molasses, dates, raisins and cherries, dried apricots and motichur laddus .

I was trying to do some dieting lately. Bad idea. Very bad idea. 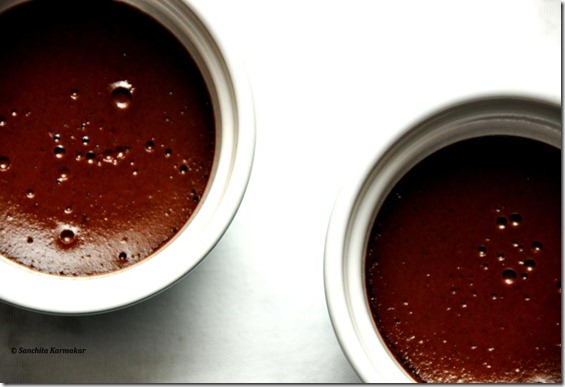 I realized it pretty soon as I was eating more than normal. All I could think about is food, food and food. So, I gave up. Now back to my regular diet which includes dark chocolate. I was looking for an easy dessert to make which involves chocolate of course, and stumbled upon this recipe. Just five ingredients, doesn't take much time to cook or prepare, what else do I need? Only thing I had to make it dairy free. What can replace heavy double cream and still give that smooth, rich and creamy texture to the cream au chocolat? the answer is coconut milk. 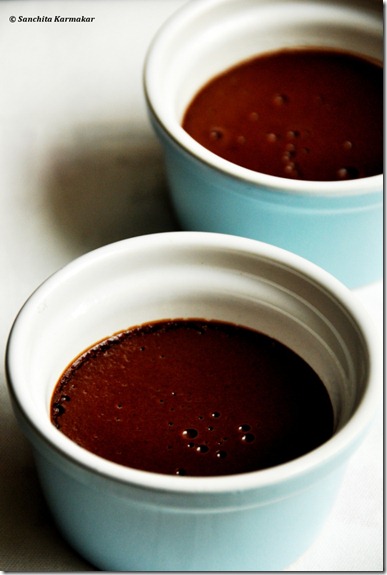 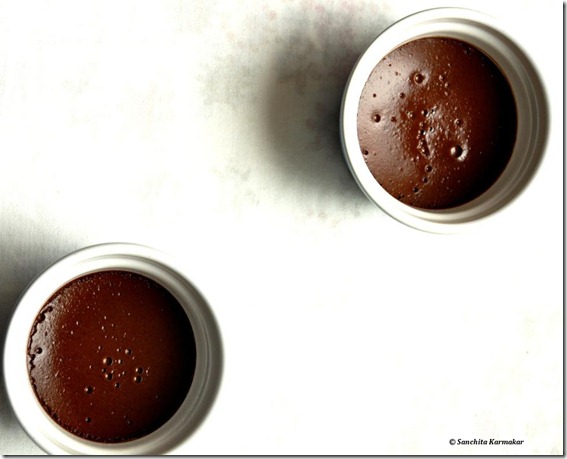 In a double boiler heat the coconut cream and the chocolate together and keep stirring until they are mixed uniformly. Take it out of the double boiler and let it cool for some time. In a separate bowl separate the three eggs yolks. Add a spoonful of sugar to it and whisk it for at least 5 minutes or until the mixture turns pale yellow. 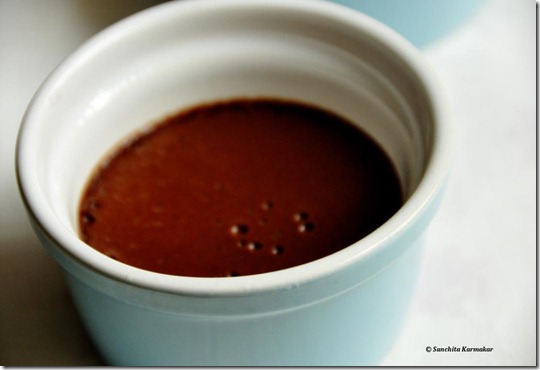 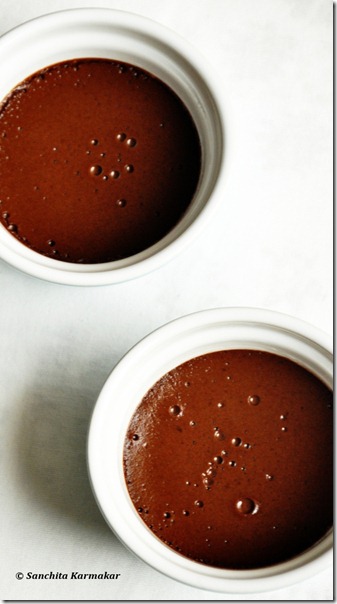 After 20 minutes in the oven take the tray out of the oven. Remove the cover and check if the puddings are set on the sides. Slowly remove the ramekins from the baking tray and let them cool on a wire rack. Be careful of the boiling hot water of the baking tray. Once the ramekins are cooled down a bit cover them again and keep them in the fridge for at least 4 hours to set. Serve chilled with some strawberries or raspberries on top or just like that. 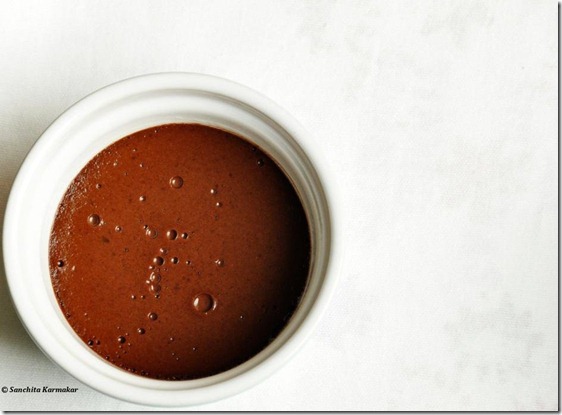 I cant believe I am writing my hundredth post! A few years ago someone asked me ‘Why don’t you start blogging?’ and I laughed. Me? Blogging? And now look at me, completing my maiden ton! 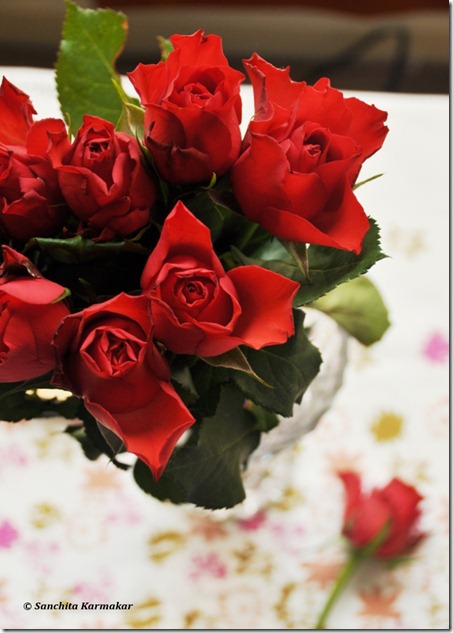 I wanted to do something special for this post and as usual breaking my head over this for some time. Then on Twitter I saw a tweet from Bristol Bites that she was taking up a challenge to raise funds to support a very noble cause. It is called Live Below the Line. The charity that is fighting against the world poverty. They had a challenge for the participants to have at least three meals of the day costing no more than £1 /day. The event started on 7th May and went on till 11th. While taking up this challenge you can have sponsors who would sponsor you by donating money to Live Below the Line for this noble cause. I was really excited and immediately asked Emily (Bristol Bites) that I am interested to take part, how do I do it? She got back to me immediately with all details and an invitation to join her team. I signed up and accepted her invitation on T-2 days.

I had to plan my all 15 meals for the challenge and have on £5 to do so. Not only the main items I need to buy within that but also the other things like salt, oil , pepper or any spices I intend to use should also be included in your budget. So I measured roughly how much I need for the 5 days and calculated the price of them (salt, teabags and oil) and added in my list. Here is what my list looked like.

My shopping and item cost list for the 5 days challenge :

Armed with my above shopping list and my fingers cross I started my challenge on 7th May.

Breakfast: 2 slices of bread toasted and with jam + a cup of black tea

Lunch: Mushroom and onion pasta (cooked enough for at least 2 meals, stored the left over for another meal )

Dinner: Made hand made roti and potato fry (I made some 10 rotis and enough potato fry for another 2 servings.)

Day 1 felt quite good, was very tired by the end of it because I also had to make food for my little one and my hubby, which was obviously different from my food.

Breakfast was again the same as day 1 , Jam toast and tea.

Lunch : left over roti and potato fry and a cup of tea with milk this time.

Dinner : I just had a packet of instant noodles. Easy and lazy meals.

Breakfast : Same old same old, jam toast and tea. Three days in a row, so started to get a bit boring now! I consoled myself saying to morrow I will have something different.

Lunch: Mushroom and onion pasta, left over from day 1. So no cooking for me!

Dinner: I still had 2 rotis left but there were no cooked potato left so I cracked two eggs and made two omelettes with them adding quarter of an onion, salt and pepper to each omelette. Next wrapped the omelettes in the rotis to make two individual egg roles, to complete my dinner. A little bit of tomato ketchup would have lift the flavours but that wasn't in my budget.

Still going on ok but started to feel the pressure. Still 6 more meals left, and I am already running low in steam. Especially because I am addicted to chocolate, and that wasn’t there in my budget! I tried a lot to fit at least some chocolate in my budget but it was just not possible. Now I know I have chocolate in my fridge and I am craving for it but can’t have it! Every time I open the fridge to take something out, I felt, that bar was staring at me and asking “why I am still untouched?” Ignoring such temptation was real tough for me!

Breakfast: I made muffins. Her is how I did! I used 2 eggs, instead of butter I used oil (2 tbsp), I didn’t have sugar in my budget but there were lots of jam so used quite a lot of them and there were no shortage of flour and milk! They aren't the best muffins I had ever tasted but it was a change from my regular jam and bread. I had 2 of 5 muffins I made.

Lunch: Instant noodles. Made them slightly different! boiled the noodles in plain water and then fried them with little onion and mushroom and the taste maker it comes with. Wasn’t bad!

Dinner:  Made Alu paratha. Ideally we would have it with yoghurt and spicy pickle but both were not not my budget so had them just like that! Trust me it was good on its own. Had 3 out of 12 I made.

This was the last day of the challenge and I was eagerly waiting for it. Finally after this day I will be able to eat what ever I want, when ever I want! Trust me that dark chocolate bar in my fridge was calling me like anything and I was doing the hours countdown..15, 14, 14.5…

Breakfast: My fabulous muffins I made yesterday! I guess any thing hot out of the oven taste much better than a day old! Anyway, just two more meals left to go.

Lunch:  Left over Alu parathas and cup of tea.

Dinner: I had two of the eggs left, so decided to make some French toast (savoury version, not the sweet one!) with the bread! Basically beat the eggs with salt, pepper and finely chopped onions, dip the bread in the egg mix and shallow fry them.

I used most of the items in my shopping list. The thing I was left with was half a pack of bread, some flour, half a bottle of jam and 2 packs of instant noodles. It might not have shown in the above meal description but I did finish all the teabags and milk I had in my budget. Now, I am back to my usual routine. During the challenge, I was so tempted to eat chocolates, I thought when the challenge ends, the first thing I would eat is that bar of chocolate sitting in the shelf of my fridge door. Surprisingly enough I didn't. I just went on with my usual life and food and forgot about the chocolate! 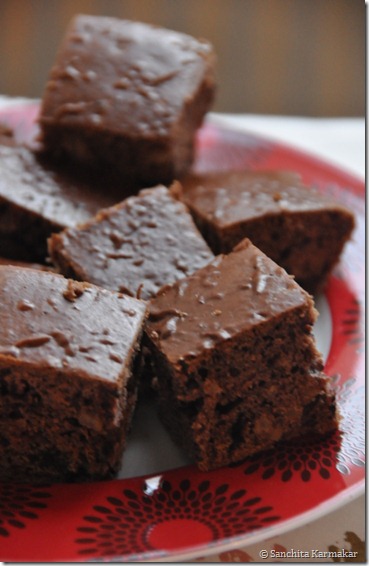 Well, that didn’t last long! I received a pack of Billington’s sugar and a recipe to make some chocolate muffins from Baking Mad. I made the batter but due to this last week challenge and the fact that I was working with chocolate, I was running out of patience and instead of making muffins and I made a batch of chocolate brownies and before I know almost half of it was gone!

I couldn't raise much, but after reading my story if you feel like donating for this noble cause you can still do it here.

Stevie Parle’s Dock Kitchen Cookbook is a collection of recipes from around the world. The recipes are categorized according to the four seasons in the year, beginning with Spring and all the way till winter. For the people who are not aware yet, Doc Kitchen is Stevie Parle’s popular restaurant in London and he is been awarded the Observer Food Monthly Young Chef of the Year 2010. 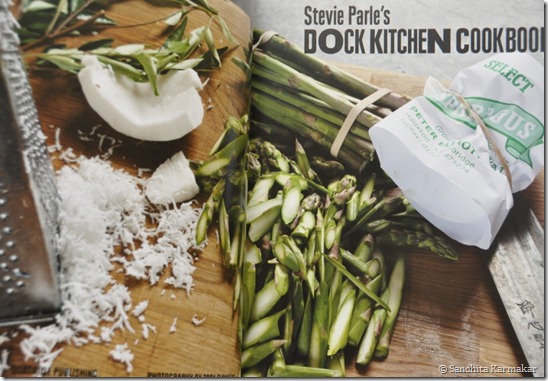 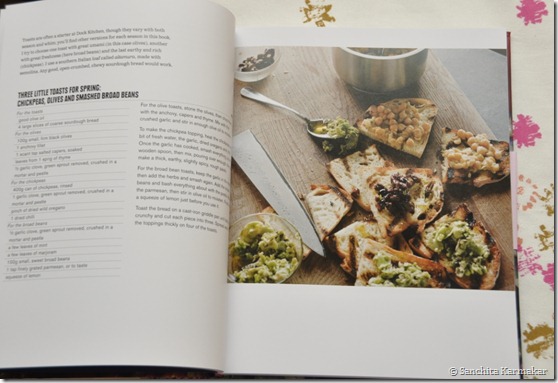 The fact I love about the book is that it is very well designed, photographed and organized. At the very beginning with the seasons are listed with page numbers, which makes the book very easy to access. The book is full of beautiful photographs and easy to follow recipes. 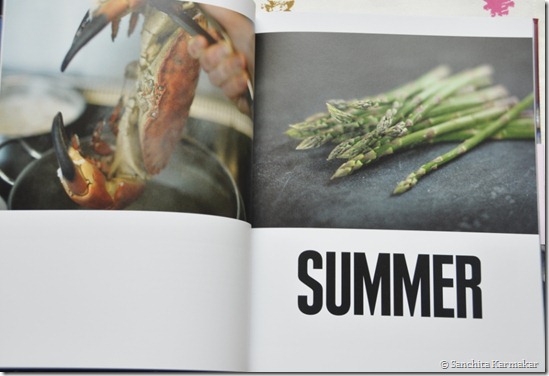 As soon as I read that the book claims to have recipes from all around the world, the first thing I was looking for some Indian recipes and I wouldn't have guessed this one “Chaat”. I also found “white chapati”, “brown chapati”, “Amritsari Kulcha” and then I found “Rabbit Biriyani”! I have never had or heard of it but I guess that’s how innovation works! I am definitely going to try that one! The book also contains recipes from Mexico, Italy, Iran, Lebanon and many more. 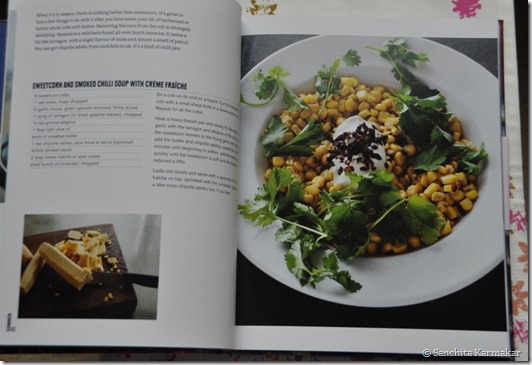 In the book the author has used many ingredients in his recipes that we normally won’t pick up on our weekly veg shopping. For example, elderflower in grappa batter. But that’s the uniqueness of the book that you will find recipes that they will make your everyday meal a special one. If you are an experimental foodie then this is one cook book you should definitely have. 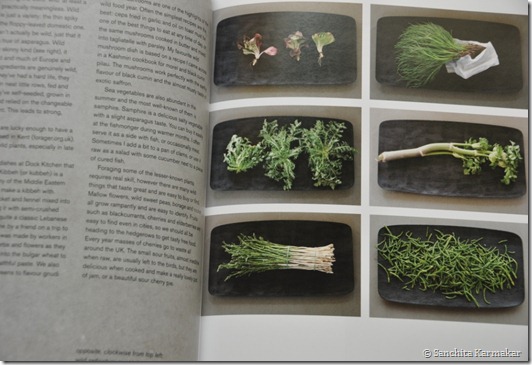 Now about my favourite topic : Desserts of this book! The book contains 11 ice cream recipes!! and none of them are very commonly used combinations! Now all I need is an ice cream maker to try these recipes! 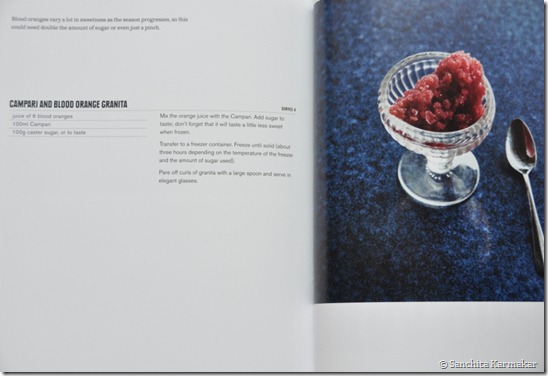 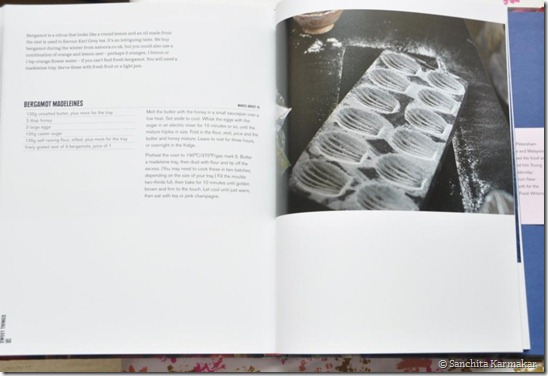 I loved the photos in the book. A picture speaks a thousand words and that exactly most of the photos of this book are doing. The recipes are very straight forward along with beautiful food photography by Toby Glanville. The book is published by Quadrille publication and now available in Amazon. 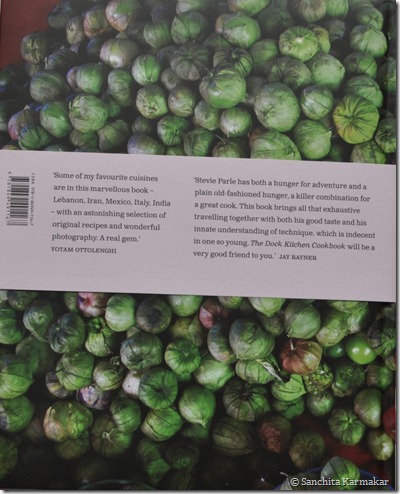