Coconut always reminds me of festive sessions in India. I can't think of one festival where I have not seen coconut being used. In India any puja, festival or any auspicious ceremony will not be completed without coconut. I was pleasantly surprised to know that there is a festival in Maharastra which is named after this tropical fruit. It's called the "Narali Purnima" which is celebrated during the month of Shravan (August) by the fishermen.

I made these pancakes quite some time ago but never really got a chance to upload them. This week I was going through my list of unpublished recipes and found this one. Although I have uploaded the photos on my Facebook page but the recipe was not uploaded. Back in India we used to relish on this dish during Makar Sankaranti around end of January. The dish is called Patishapta in Bengali. I have made little changes to the original recipe. So here is the recipe of Patishapta with chocolate sauce. 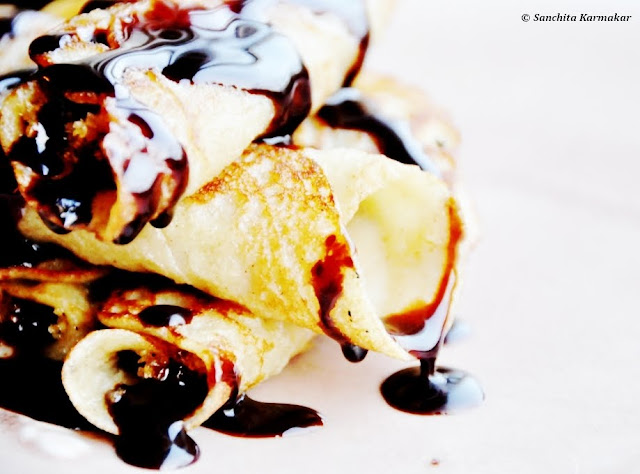 For the coconut filling:

For the Chocolate Sauce: 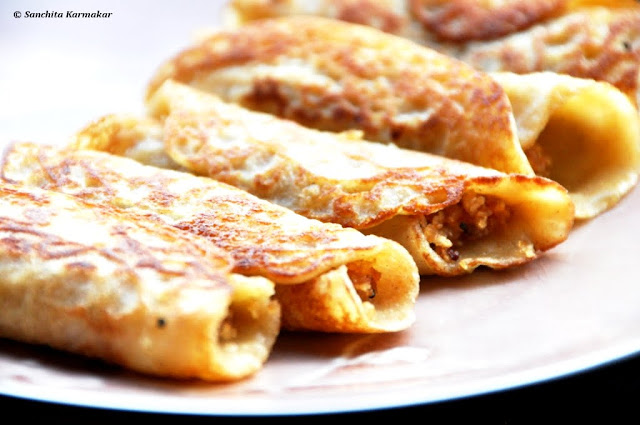 Mix all the dry ingredients for the pancake, then add the milk and mix well until it becomes a thick homogeneous mixture. Keep it aside. In a deep bottom pan mix the coconut, sugar, maple syrup and honey until the sugar has melt and the whole thing has become sticky. Crush the green cardamom seeds and mix in the coconut mixture well.

Break the chocolate in to pieces and place them with the butter and sugar in a Bain-marie and let it melt till it becomes a pool of chocolate. Add the double cream and the vanilla essence; mix well with a wooden spoon. Remove from the water bath and let it cool.

Heat oil in a non-stick pan, add spoon full of pancake batter and spread with the spoon. Cook till bubble forms on the top. Place the coconut mix on one side of the pancake and roll the pancake and keep for a minute and remove from the pan.Repeat the procedure for every pancake you make. Serve hot with the hot fudge sauce. 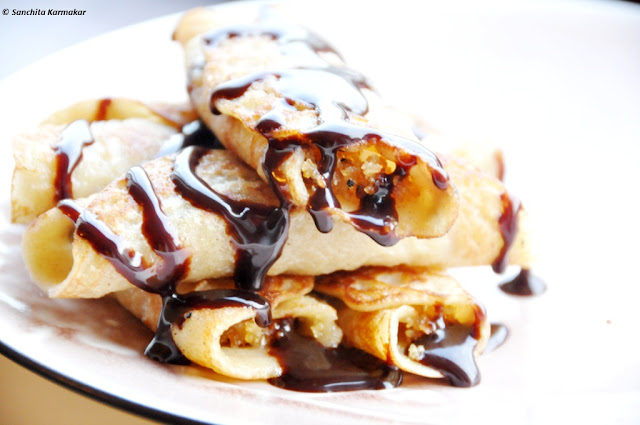